How the Japanese art of rope bondage hit pop culture 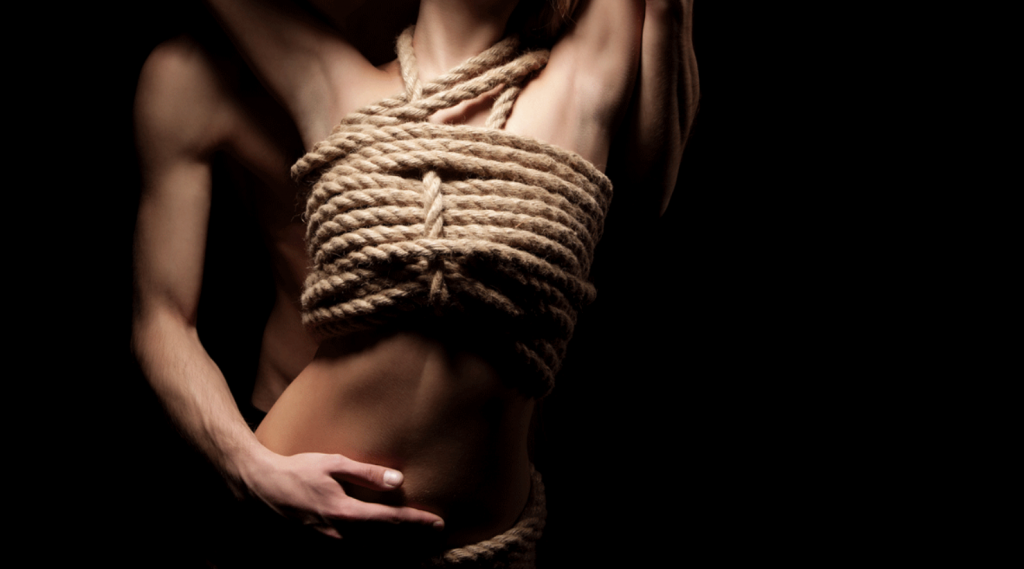 In a pub in Peckham, south London, ropes are speaking. As shadows swim on the screen behind them, Dry Sin and Billie Rose, two shibari performers from Romania, engage in a silent play of wanting and will whilst the audience observe like a vigil. Dressed in a white shirt Sin weaves the cord around the contours of Rose’s body, binding her thighs and her arms, taking his time, letting the rope, which is snaking about her limbs, do all the talking. A hook glints overhead and as she kneels, carefully as though she has been forgiven, as he clips a carabiner in place. Then, slowly and softly, he lifts her into the air, her concertinaed flesh aloft in a cradle of rope.

This is The Flying Dutchman, home to Bound, London’s leading shibari night, where kinksters come to learn how to be ‘rope bunnies’ (those tied) and ‘riggers’ (those tying and lifting) and then kick back to watch international artists show off their skills in a series of performances. 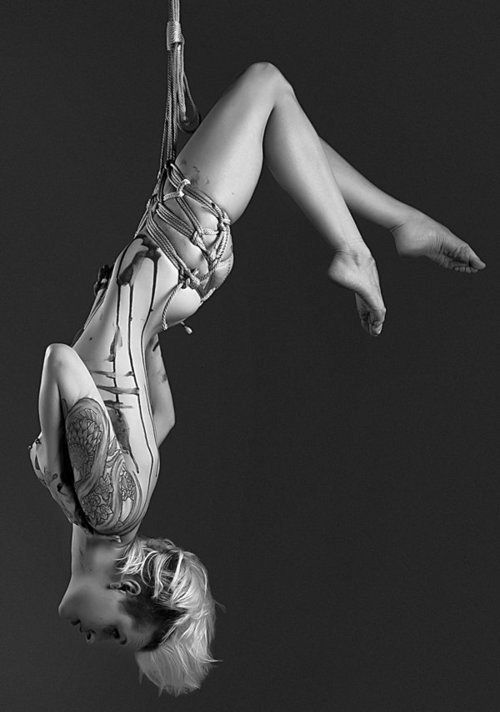 Shibari, also known as kinbaku, is the Japanese art of rope bondage and means “the beauty of tight binding”. Dating back to the 13th century, it was originally used as a quick and respectful method for restraining captives but by the 19th century the practise had become sexualised, booming in 1970’s Japan and explored by legendary photographer Nobuyoshi Araki throughout his career, before expanding across the globe as a kinky form of restraint with a respected and erotic aesthetic. In 2011, Araki’s Polaroids of Lady Gaga tied in rope leaked online and late in 2016 Araki introduced kinbaku to a legion of hypebeasts when he shot Kiko Mizuhara covered in rope for a Supreme collection, a seismic moment where the art form entered new, unexpected realms.

Today, it’s heavily influencing all strands of pop culture. Rope can be seen on TV in New Girl (when Jess’ sister ties up Schmidt) and in FKA twigs’ “Pendulum” music video featuring the singer in a spiraling suspension. twigs posted an Instagram image acknowledging the shibari influence, writing that tying her braids “represent my own self-constraining my own self cause that’s how i used to roll until i figured out how that shit is long as hell.” twigs was tied by UK-based shibari artist Dave Rickman, known on the shibari scene as WykD Dave. He’s also tied Lady Gaga. In 2014, a portrait of Gaga tied and suspended was displayed in the Louvre in Paris as part of Robert Wilson’s Living Rooms installation.

Rope art has definitely worked its way into popular fashion too with shibari-inspired accents appearing on runways and editorials all over the world. Galliano debuted heels with rope binding the ankles in Dior’s Spring Couture show, while in 2009 Net-a-Porter were selling a ‘crepe Shibari shift dress’.

Rope artist and the founder of Bound, Bruce Esinem, has certainly played his part in the globalisation of shibari as art. He’s worked on various artistic collaborations, including Tom Ford’s 2013 bondage collection; artist Raqib Shaw’s £2.5 million work Moon Howlers; and music videos for Primal Scream and The Big Pink. He celebrates the collaborations on his website and says this is always want he wanted to happen to the UK shibari scene, “to push the artistic angle”.

A pioneer of the UK scene­, Esinem says UK “aerial tango,” as he describes it, differs from its Japanese and US counterparts because the scene here is performance-centric (fittingly, the aforementioned Gaga portrait was taken from a film of performance shibari starring the pop star). The performances that really capture people — even if they’re not rope geeks — are the ones where real emotion is displayed; real emotion translated through the rope. “If you talk like a robot, even the most stunning piece of poetry would be unmoving. What gives it life is the pauses, the changes in pitch, and it’s the same when you touch someone. You can say a hundred different things with one finger, depending on what you do with it,” Esinem says. “And the way that you put the rope on someone, it’s a language in itself. It’s an extension of my hands, of my will, my intent.”

“The way that you put the rope on someone, it’s a language in itself. It’s an extension of my hands, of my will, my intent” – Bruce Esinem

Esinem learned from Arisue Gō, one of the world’s leading Japanese bondage artist and the first shibari master to do a show here in London, in Esinem’s living room no less, back in 2005. Over a decade later and the London scene has exploded with ‘rope jams’ taking place at various places across the city and international rope artists jetting in to perform at seminal club nights like Torture Garden and Subversion.

“The sight of a tied partner obviously has huge appeal, but it’s not just how they look, it’s the possibilities and sensations that the look delivers that are as important” – Scarlett Letter

However, more experienced rope practitioners find the purity of rope is a lasting draw, with the opportunities endless and the visual appeal always arresting. “Rope and skin are just a great combination,” says Letter. “In a power exchange with sexual overtones, the sight of a tied partner obviously has huge appeal, but it’s not just how they look, it’s the possibilities and sensations that the look delivers that are as important.”

Cam Damage is a shibari model based in Baltimore. She describes live rope bondage as an “incredibly connective, interactive, and evocative art form”; a one-of-a-kind sculpture out of rope and human. “It isn’t just something to view and move on from, like a painting or drawing,” she says. “On the outside looking in, to see the pain and pleasure consume the bottom [the one being tied], to watch them process that pain and strain and eventually relax into the ropes. To witness the rigger work, right before the eyes of the audience, to create this beautiful piece of art in real time. It is a truly unique sensory, emotional experience.” When Damage performs she says she can feel herself “becoming art.”

Esinem says the appreciation for the performance element of shibari is the scene’s “natural evolution.” He compares shibari now to Butoh a few years ago, another popular art form on the niche London scene; an avant-garde Japanese dance form that quite often has the participants fully body painted or completely naked, which was once regarded as firmly underground but is now a visibly mainstream art form. Could shibari be going the same way?